The Soloists of Mass in B Minor

Joined by a distinguished quartet of soloists and Artistic Director James Kim, Colorado Bach Ensemble is thrilled to once again present one of the towering masterpieces of Western civilization, Johan Sebastian Bach’s Mass in B Minor.

Finally completed in the last year of his life, Bach never heard the work in its entirety, but it stands as perhaps his greatest musical monument. The performance is all the more impactful with the voices of our soloists who share their talent for this end of season event. 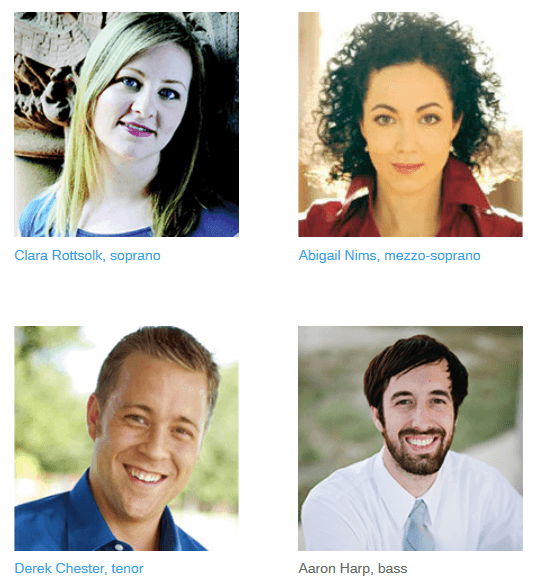 Described as “pure and shining”, soprano Clara Rottsolk has been lauded by The New York Times for her “clear, appealing voice and expressive conviction” and by The Philadelphia Inquirer for the “opulent tone [with which] every phrase has such a communicative emotional presence.” In a repertoire extending from the Renaissance to the contemporary, her solo appearances with orchestras and chamber ensembles have taken her across the United States, the Middle East, Japan and South America.

Praised by the New York Times for his “beautifully shaped and carefully nuanced singing,” tenor Derek Chester is steadily making a name for himself in the world of classical music. Mr. Chester received his Bachelor’s degree in Vocal Performance from the University of Georgia. He completed his Master’s Degree in Vocal Performance of Oratorio, Early Music, Song, and Chamber Music on a full scholarship from the Yale School of Music and Institute of Sacred Music. As a Fulbright Scholar, he spent a year in Germany working as a freelance musician and furthering his training with acclaimed German tenor Christoph Prégardien. Chester received his Doctorate in Musical Arts in Voice Performance and Opera Studies from the University of North Texas working as a doctoral teaching fellow with a dissertation on the early education and juvenilia vocal works of American composer Samuel Barber.

Praised by the Dallas Morning News for his “appealingly rich baritone” and “sensitive singing”, Aaron Harp is building a reputation around the nation as a stylistic performer of early music. Recent solo engagements include performances of J.S. Bach’s St. Matthew Passion, St. John Passion, Mass in B minor, and Christmas Oratorio, Handel’s Messiah, and Mozart’s Requiem.

Join us for a celebration of the extraordinary power of Mass in B Minor.