Season 2018: A Journey Through the Sacred and Secular

J.S. Bach was industrious. We have more than 1,000 surviving works written by the composer, and who knows how many more he wrote.

All of these major works come from his Leipzig years after he moved there in 1723. There is one genre, however, that he composed throughout his entire career: his cantatas. It is ironic that he never called them “cantatas,” and the original cantata as a genre was secular music in Italy. Most of his cantatas are sacred, written for specific Sunday worship services. 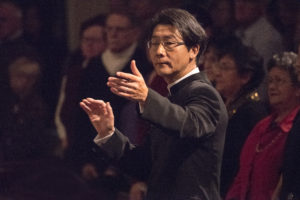 There are more than 200 cantatas that are attributed to J.S. Bach. We don’t get to hear many of these works though I think they are absolute hidden gems.

For the annual tradition of our complete Messiah in December, we will welcome back our soprano, tenor and the bass soloists; Awet Andemicael, Dann Coakwell, and Andrew Garland. In addition, Anna Englander will be joining us as our mezzo soloist for the first time. Again, you won’t be disappointed to hear our rendition, and I encourage everyone to get the tickets as soon as possible.

For our final concert of the season in May, we are doing several things for the first time. We will be performing purely instrumental music; Brandenburg Concerto #3 and a violin concerto. The concerto will feature a winner of the first concerto competition we will be implementing this year. Through a live competition, the winner will be featured as a soloist and also will be playing as an ensemble member. Bach didn’t write much secular vocal music, but there are two cantatas that stand out; Wedding Cantata written for a soprano and the Coffee Cantata written for three soloists; a soprano, a tenor and a bass representing three characters. The Coffee Cantata is considered as a miniature comic opera though it was originally written for concert performance.

We are thrilled to continue our journey in our upcoming season 7 with multiple cantatas (both sacred and secular), Messiah, and instrumental chamber music featuring the concerto competition winner. I hope you make plans to attend as many events as possible, if not all.

Purchase tickets for our 2018 season today. I look forward to seeing you this season!